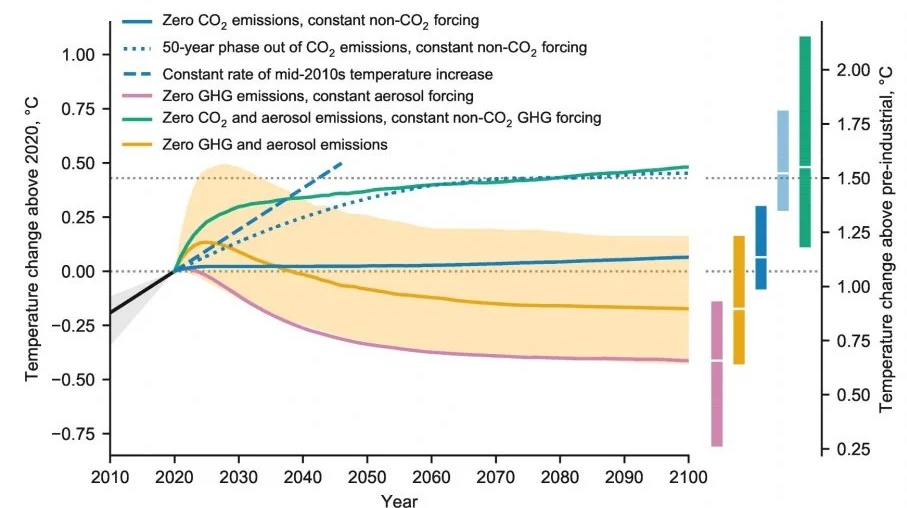 By Mark Hertsgaard, Saleemul Huq and Michael E. Mann
(note: this is the original full version of our recent Washington Post op-ed, based on a recent press briefing involving the authors, sponsored by Scientific American and Covering Climate Now)

One of the biggest obstacles to avoiding global climate breakdown is that so many people think there’s nothing we can do about it.

They point out that record-breaking heat waves, fires, and storms are already devastating communities and economies throughout the world.  And they’ve long been told that temperatures will keep rising for decades to come, no matter how many solar panels replace oil derricks or how many meat-eaters go vegetarian.  No wonder they think we’re doomed.

But climate science actually doesn’t say this.  On the contrary, the best climate science you’ve probably never heard of suggests that humanity can still limit the damage to a fraction of the worst projections if—and, we admit, this is a big if—governments, businesses, and all of us take strong action starting now.

The science we’re referencing is included in the UN Intergovernmental Panel on Climate Change’s most recent report, issued last August.  But first, some context.

For many years, the scientific rule of thumb was that a sizable amount of temperature rise was indeed locked into the earth’s climate system.  Scientists believed—and told policymakers and journalists, who told the public—that even if humanity hypothetically halted all heat trapping emissions overnight, carbon dioxide’s long lifetime in the atmosphere combined with the sluggish thermal properties of the oceans would nevertheless keep global surface temperatures rising for 30 to 40 more years.  Since shifting to a zero-carbon global economy would take at least a decade or two, temperatures were bound to keep rising for at least another half century.

But guided by subsequent research, scientists dramatically revised that lag time estimate down to as little as 3 to 5 years. The updated finding is included in the IPCC’s Sixth Assessment Report, Working Group I, that made headlines last August.  Indeed, it underlies the widely-now used concept of a “carbon budget”. It allows us to specify (with some uncertainty range) the maximum amount of carbon that we can still burn if we are to keep global surface warming below the critical level of 1.5C (3F).

Most importantly, it tells us that if humanity slashes emissions to zero, global temperatures will stop rising almost immediately.

To its credit, Scientific American did discuss this updated science in a short article last October. But why isn’t this reason for cautious optimism more widely known?

There’s plenty of blame to go around. Two of the co-authors of this article are climate scientists, while the other is a veteran journalist.We can collectively attest that scientists aren’t always the best natural communicators, journalists and scientists typically don’t speak the same language, and much gets lost in translation. Add to that the concerted headwind of a fossil fuel industry-funded disinformation campaign, and you have the makings of a substantial breakdown in communication.

That’s a shame, because this revised timeline implies a paradigm shift in how humanity can respond the to the climate emergency.  The implications fall into three categories—the three P’s of psychology, politics, and policies.

Psychology is arguably the most important, for it makes possible the rest.  Knowing that global temperature rise can be stopped almost immediately means that humanity is not doomed after all.  We can still save our civilization, at least most of it, if we take rapid, forceful action.  This knowledge can banish the sense of inevitability that paralyzes people and instead inspire them towards greater resolve and activity.

This psychological shift can in turn transform the politics of climate change, for it can entice more people to join the fight—or to stay in the fight rather than succumbing to despair.

Newcomers to climate action might begin by eating less meat or ditching the gas-guzzler for an electric vehicle. Another key step, the climate scientist Katherine Hayhoe urges, is for people simply to talk more about climate change with family, friends, and co-workers—because you can’t solve a problem if you don’t even talk about it.

Most important, though, politics must be committed.  “Many individuals are doing what they can,” the naturalist David Attenborough has said.  “But real success can only come if there is a change in our societies and in our economics and in our politics.”

That will only happen if many more people vote, march, and otherwise pressure governments and corporations to favor climate protection over climate destruction.  For example, the world spent an estimated $5.9 trillion in 2020 subsidizing fossil fuels, the main driver of global warming.  US taxpayers alone subsidize oil and gas drilling by $660 billion a year.  Making fossil fuels artificially cheaper in this way tilts the economic playing field so lopsidedly that it hardly matters how many individuals decide to take the train rather than fly.

Astonishingly, even people who consider themselves environmentalists do not always vote.  In the US, environmentalists could decide the crucial 2022 mid-term elections in eight swing states if they just bothered to vote, according to data compiled by the nonpartisan Environmental Voter Project.  Almost one million people who did vote in the 2020 general election have never voted in a mid-term, the project found.

Finally, changing the politics of climate change can change the policies used to fight it.  Measures that once seemed politically impossible—such as the Green New Deal or president Joe Biden’s Build Back Better legislation—can suddenly become feasible as some lawmakers get voted out and others get voted in, and even recalcitrant lawmakers still in power begin to calculate the costs of blocking action differently.

Where all this matters most is in highly climate vulnerable communities, especially in the global South.  Countless people in these communities have been suffering climate disasters for decades already, because their communities tend to be more exposed to climate impacts and have less financial capacity to protect themselves.  For these people, limiting global temperature rise to 1.5 degrees Celsius is not a scientific abstraction but rather “a matter of life and death,” Mohammed Nasheed, the former president of The Maldives said at the COP26 UN climate summit last November.

The fact that 30 more years of rising temperatures is not necessarily locked in is tremendously empowering, but it is not a silver bullet.  Some impacts are already irreversible, especially ice sheet melting and sea level rise.  The IPCC’s next report, due for release later this month, will address how societies can adapt to these and other such profound challenges.

Nevertheless, the latest climate science suggests that COP26’s goal of keeping 1.5C alive remains within reach—if humanity phases out fossil fuels rapidly and slashes emissions in half by 2030.  If we do that, we might still preserve a livable planet for all who deserve it, which is everyone.