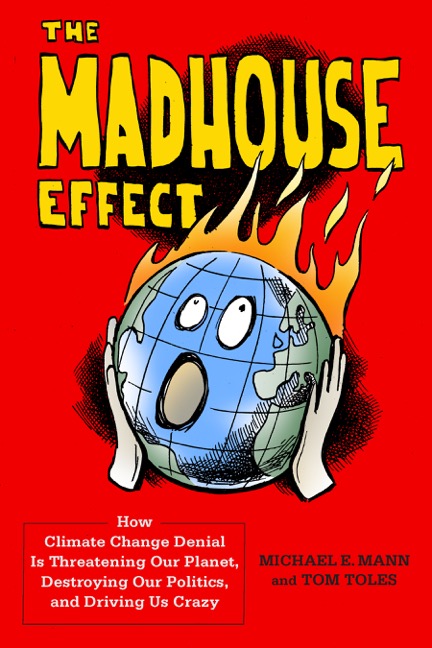 The award winning climate scientist Michael E. Mann and the Pulitzer Prize-winning political cartoonist Tom Toles have fought at the frontlines of climate denialism for most of their careers. They have witnessed the manipulation of the media by business and political interests and the unconscionable play to partisanship on issues that affect the well-being of millions. The lessons they have learned have been invaluable, inspiring this brilliant, colorful escape hatch from the madhouse of the climate wars.

Through satire, “The Madhouse Effect” portrays the intellectual pretzels into which denialists must twist logic to explain away the clear evidence that man-made activity has changed our climate. Toles’s cartoons collapse counter-scientific strategies into their biased components, helping readers see how to best strike at these fallacies. Mann’s expert skills at science communication aim to restore sanity to a debate that continues to rage against widely acknowledged scientific consensus. The synergy of these two commonsense crusaders enlivens the gloom and doom of so many climate-themed books–and may even convert a few of the faithful to the right side of science.

The Madhouse Effect paperback with new chapter on Trump. Get it via Amazon, Barnes & Noble, or Columbia University Press.

Buy from Barnes and Noble

Citation for "Outstanding" book, the University Press Books Committee of the American Association of University Professors

“For centuries, powerful forces of greed have tried to hide the truth, but that doesn't change reality - the earth is round and climate change is real. The Madhouse Effect brilliantly dissects the climate denial industry, empowering all of us to see the facts and take action before it's too late.”

"Michael E. Mann is one of the planet's great climate scientists, and Tom Toles may be the great climate communicator―together, they are a category 5 storm of information and indignation, wreaking humorous havoc on those who would deny the greatest challenge humans have ever faced."

"When giving public talks, I am often asked, 'What do I do about my Uncle Joe, who doesn't believe in climate change?' Now I finally have an answer: Buy him a copy of The Madhouse Effect, and tell him you won't talk to him until he has read it. Even if he doesn't read it, he'll look at the pictures, and that might just be enough."

—Naomi Oreskes, coauthor of The Collapse of Western Civilization: A View from the Future

“Brilliant, insightful, and fresh! Two gifted experts - one a scientist, the other an editorial cartoonist- invite you to be entertained and outraged, inspired and motivated to escape the madhouse that characterizes climate dialogue and politics today. \new and hilarious insigts into climate change. I loved it!"

—Jane Lubchenko, former administrator of NOAA and undersecretary of commerce for oceans and atmosphere

"Read this book and share it far and wide!"

"The Madhouse Effect should be mandatory reading for the next president-assuming that the next President doesn't want to turn the White House into a madhouse."

"Noted climate researcher, Michael Mann, takes us on a tour of the world that climate deniers have helped create, sowing the seeds of confusion and harvesting a crop full of climate inaction in the process"

"What makes [Madhouse Effect] unique is the way it combines Mann's science communication skills and Toles' illustrations, which provide a biting and amusing perspective"

"The writing is brilliantly clear and concise. The science is unfailingly accurate. And the cartoons add an immediacy, accessibility, and passion to the book that "normal" books about the climate problem usually lack".

"If you're wondering why so many politicians and news sources deny that dangerous human-caused climate change is real, and you want a relatively short and easy-to-read summary of the issue, look no further than The Madhouse Effect"

"The Madhouse Effect uses science, reason, and political cartoons to explain this polarized, hot world we live in, and to collapse the pseudo-science arguments agaisnt climate change."

"Climate scientist Michael Mann and Washington Post cartoonist Tom Toles collaborated on The Madhouse Effect. It is drawn straight from the frontline of the climate wars. In trenchant sentences the authors skate out, hockey sticks swinging, and scythe the legs from under the cabal of vested interests, venal payola scientists and shadowy political eminences rises. They name names and present a player list as well as the irrefutable tough news."
— Annie Proulx, The Guardian

A Satirical Exit from the Madhouse — Magnús Örn Sigurðsson

It's too darn hot - HE German Specialist Translations

Chapter 1: Science How it Works — Follow the link and select excerpt to read this chapter

Chapter 7: Geoengineering, or "What could Possibly Go Wrong" — Available via NCSE

The New York Times: One Thing You Can Do: Know Your Climate Facts

Ezvid Wiki: 5 Authors Of Important Books On The Environment