On The Importance of Diversity in Climate Communication 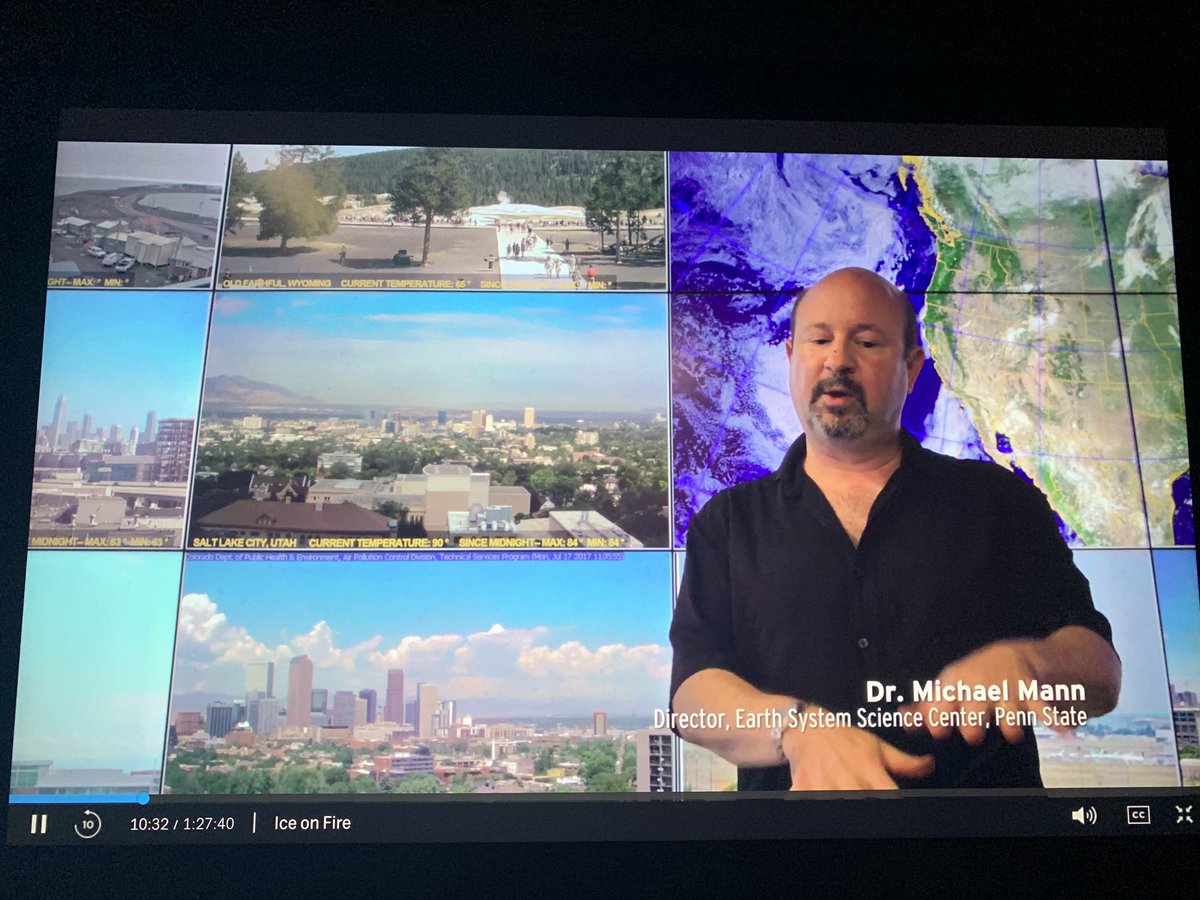 In light of recent social media posts and conversations I've had with colleagues, I want to take this opportunity to make a statement about the importance of lifting the voices of women, people of color, and other voices that have been marginalized in the world of science communication, including the discourse over climate change.

Some context here is important. In advance of the recent climate change film Ice on Fire directed by Leila Conners and featuring Leonardo DiCaprio (I appear along with a number of other leading scientists and experts), there was some online criticism about the fact that the trailer for the film seemed to be lacking in diversity, featuring almost exclusively white male scientists: 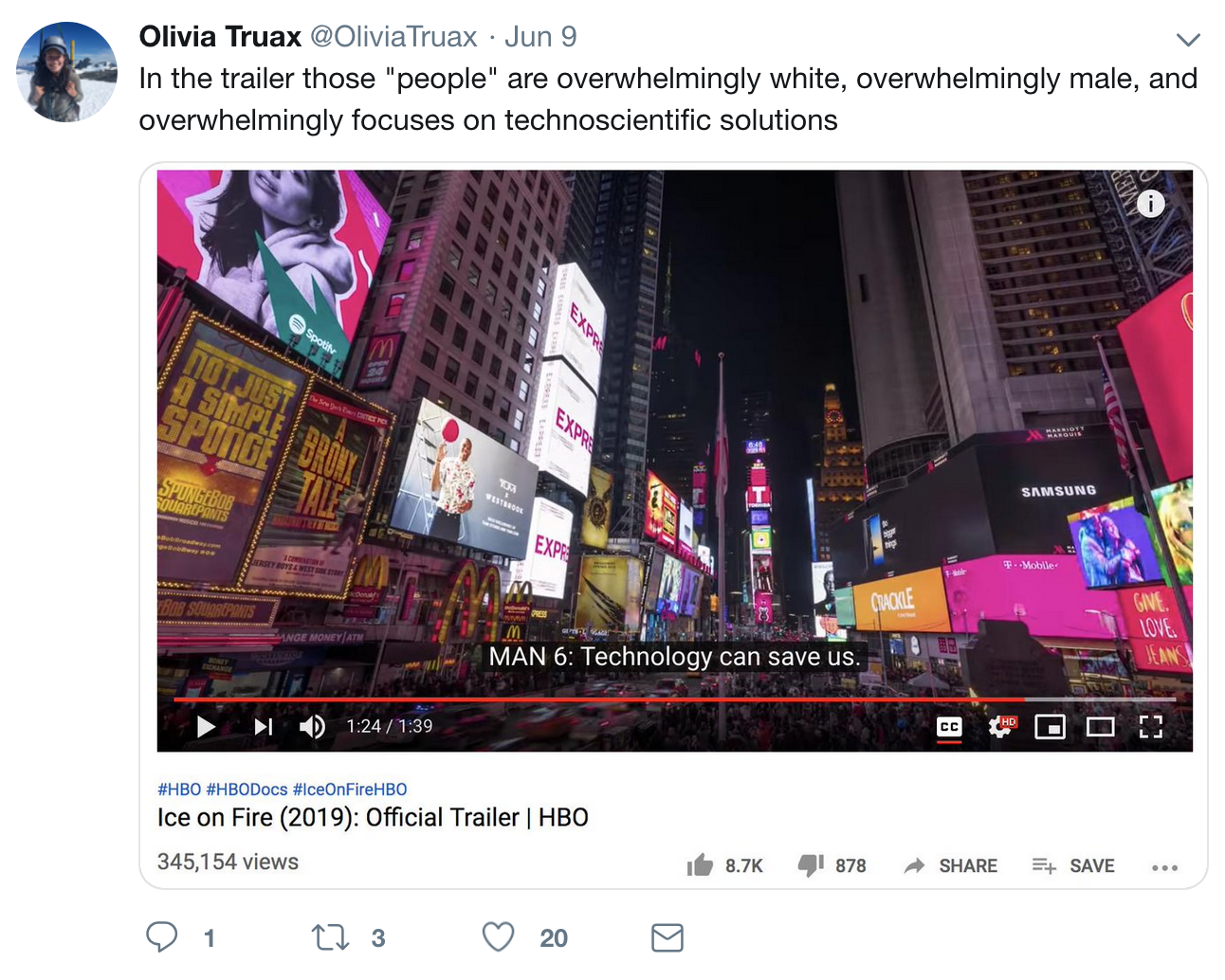 I was surprised and indeed rather defensive when one prominent weather blogger essentially blamed me for this deficiency, ostensibly because I am a white male scientist who appeared in the trailer and film. The reason I was defensive was two-fold, (1) I do not have control over the production, editing and directorial decisions that get made every time I give an interview and (2) I have consistently been an advocate for female climate scientists and science communicators, though admittedly much of these efforts have been behind the scenes and out of the public eye: 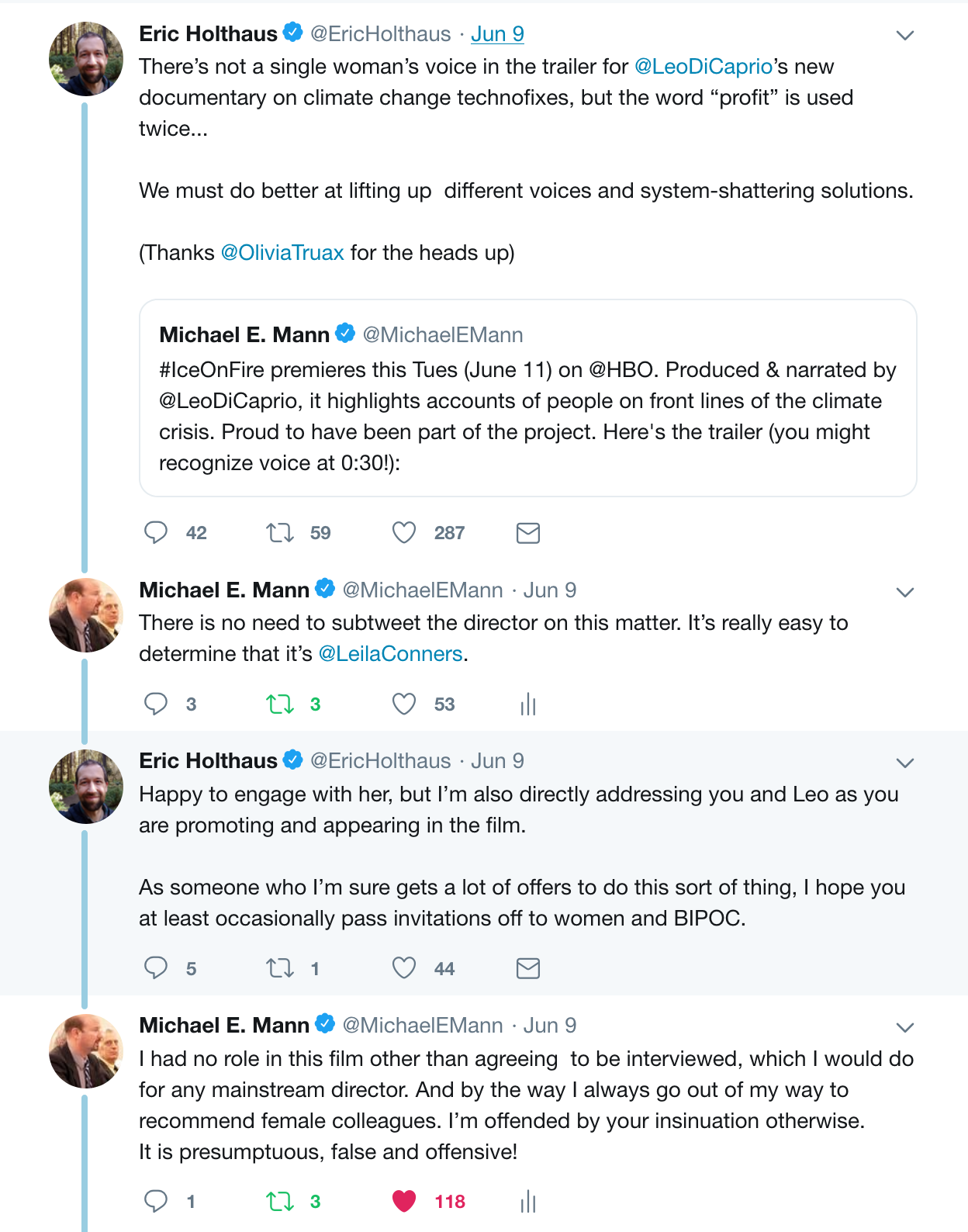 A rather unfortunate pile-on then ensued on Twitter, and I ended up blocking a number of individuals I wish I hadn't needed to.

Other observers, including a number of women scientists, interpreted the criticisms as a thinly veiled character attack: 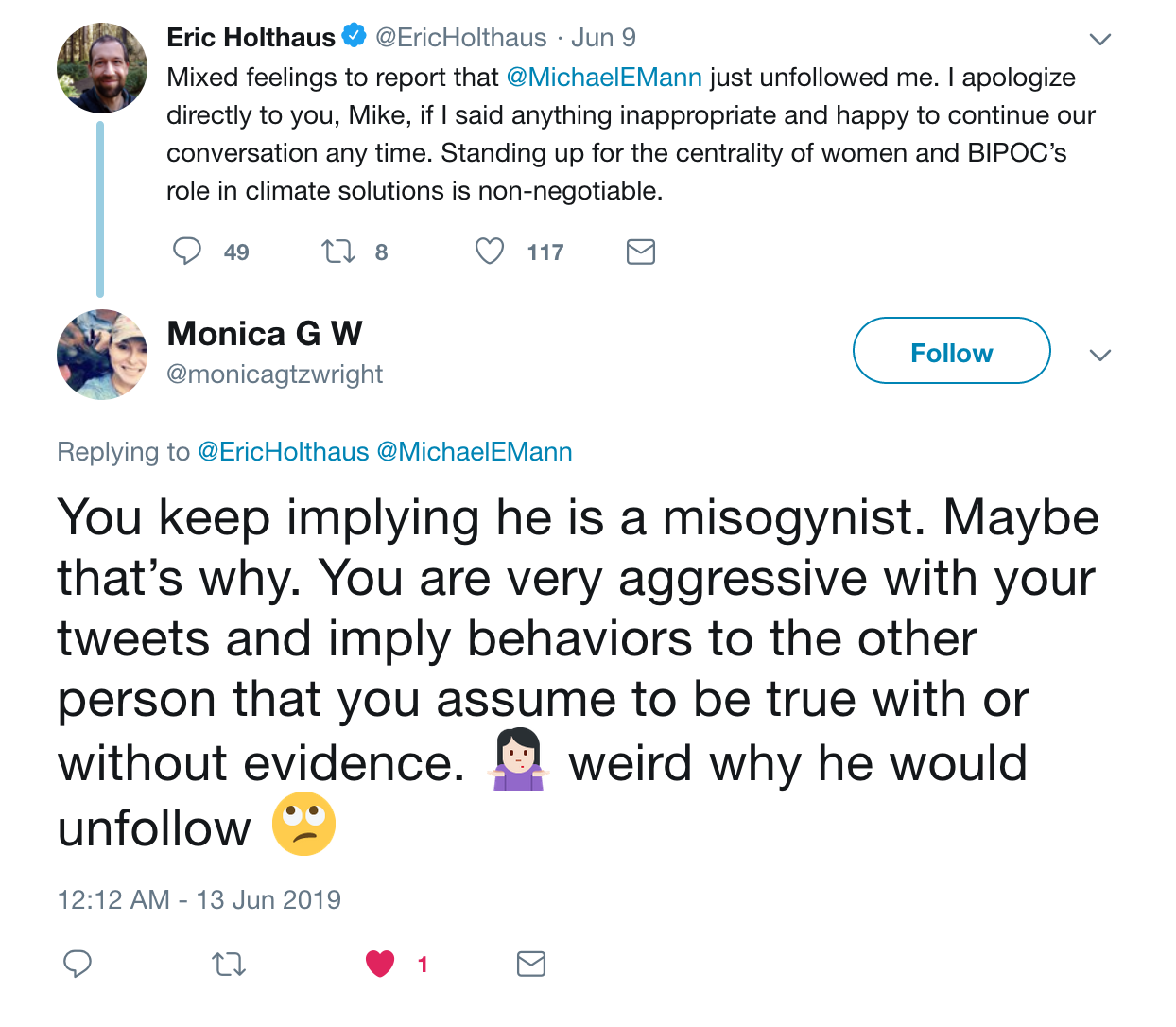 Ironically, the criticism of the trailer too was largely misplaced as the film itself has a diverse cast featuring many leading women scientists and advocates.

Indeed, the director of the film herself, Leila Conners, chose to step into the fray expressing some exasperation that folks were jumping the gun and judging the entire film by a trailer that she didn't even have editorial control over (it was produced by HBO): 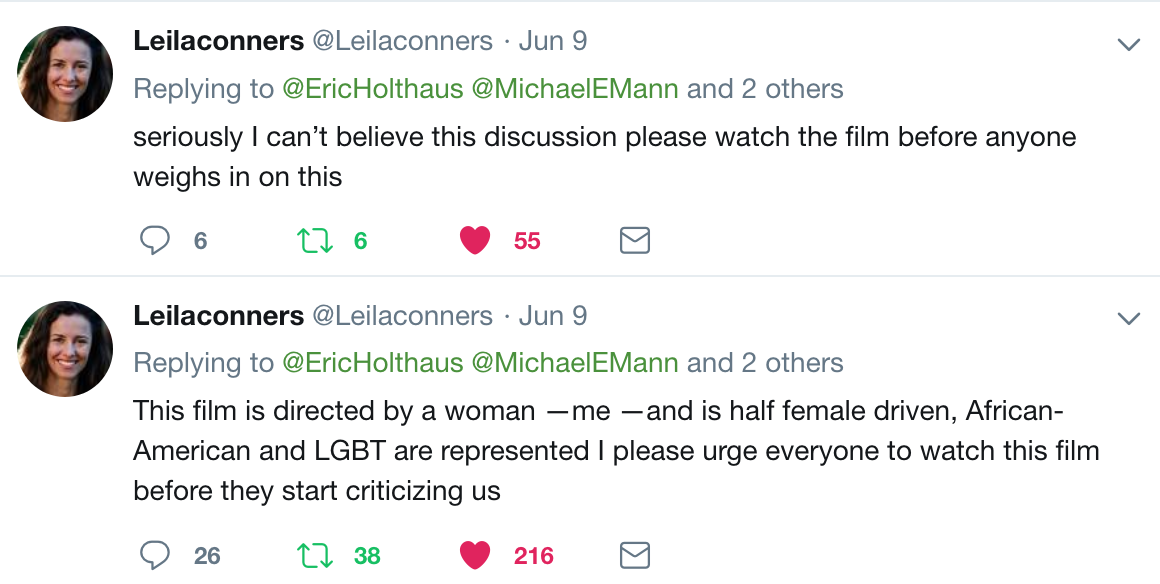 Leila Conners, moreover, thanked me for bringing the matter to her attention in the first place:

Do I think the criticism of me, was misplaced? Yes, I do. And I was honored that some women scientist colleagues kindly came out of the wood work to say as much, 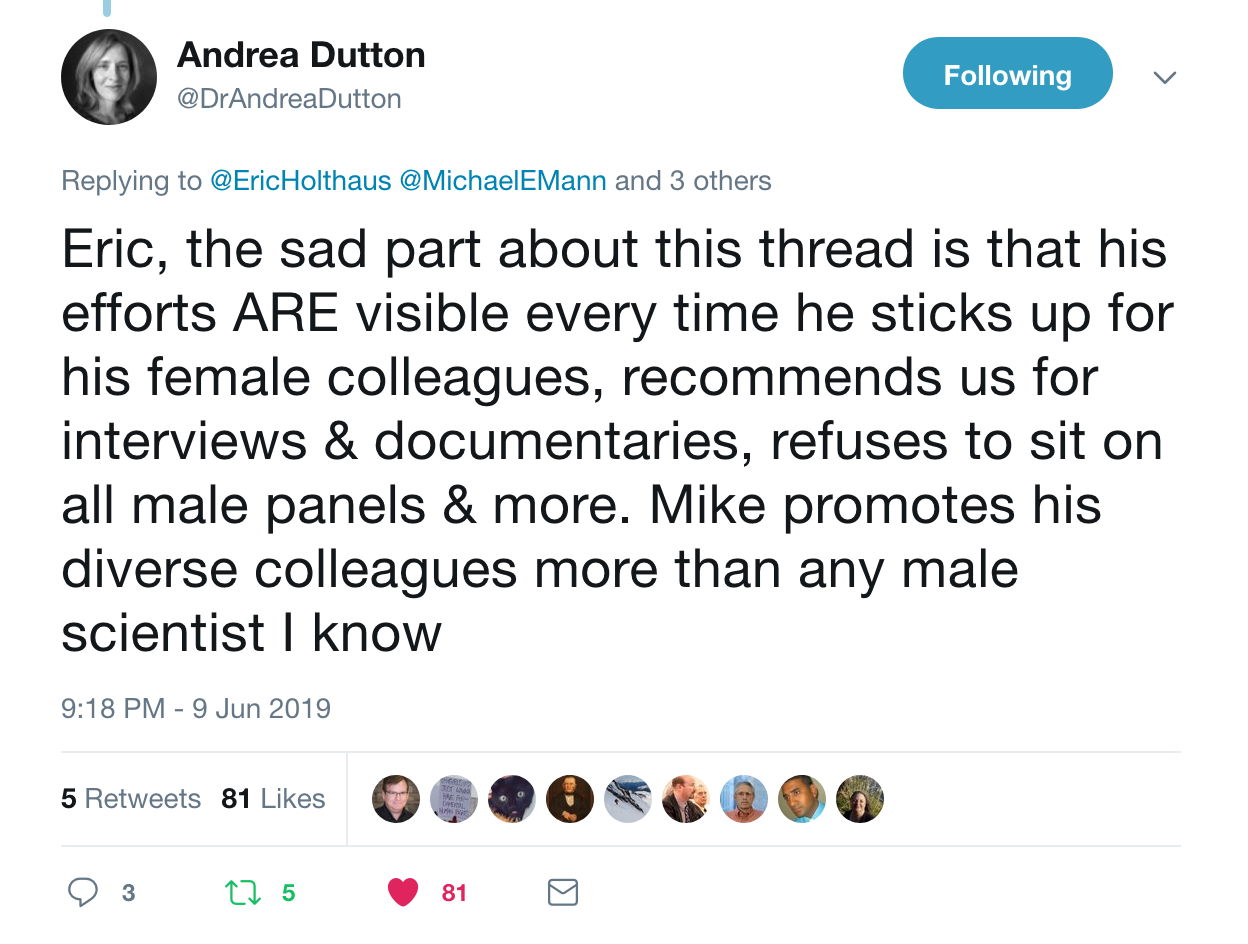 BUT do I feel that something positive did ultimately grow out of this dust-up? Yes, I do as well, because it has generated a useful and important conversation about the role that established scientists, including me, should play in helping promote a more diverse chorus of voices in the public discourse on climate.

While most of my messaging has focused on the science and policy implications of human-driven global warming, those of us who have a prominent voice in this community have a responsibility to openly and publicly support women and underrepresented groups in lifting their voices and in battling against discrimination, abuse and other forms of intimidation or belittlement.

Fortunately some progress is being made here, though many would argue it has been too slow. Consider for example the recent decision by the U.S. National Academy of Sciences to expand its definition of expellable acts of scientific misconduct to include "discrimination, harassment and bullying"; sexual harassment defined as "unwelcome sexual advances, requests for sexual favors, and other verbal or physical conduct of a sexual nature that creates an intimidating, hostile, or offensive environment". The fact that only 84% rather than 100% of Academy members voted in favor of this ultra-reasonable amendment to its bylaws, on the other hand, indicates that there is still work to be done.

I have tried to promote the principles of inclusion in my own actions. A fair amount of this has taken place behind the scenes, but, importantly, some of it has been out in the open.  My experiences, some of which I share below, have led me to some important take-away messages: (1) while I am proud of the actions I have taken to support diversity in science and science communication, there is ample room for me to be more publicly vocal on these issues, and (2) despite my efforts to support and stand up for colleagues when they are mistreated, the outcomes have not always been positive, indicating that there is still much work to be done and that we must be persistent in our efforts.

A recent article in the American Geophysical Union (AGU) newsletter Eos by Henri Drake (which I would suggest any scientist read, but particularly my fellow senior male and especially white male scientists) provides a number of helpful suggestions for how we can support women in science. While there are several important points made in the piece, I wish to focus in particular on one recommendation, the suggestion that we strive "be an active bystander". What this means is not only doing the right thing, but setting visible examples for others to follow, so that we work toward changing the entire culture in a way that is more inclusive and supportive. if more people see us pushing back and being supportive of marginalized voices, then hopefully more people will be empowered to do the same.

In one case, I co-authored a letter-to-the-editor in a prominent American newspaper with my co-author, a less senior female scientist, whose name was listed first. When the editor came back requesting we reverse the order to list me first, I objected. They caved. In another case, I suggested a reporter contact a female scientist with specific expertise on the matter in question for comment. When the journalist ended up quoting me by name and her without any attribution, I scolded him. I have called out male colleagues, in real time, when they have used sexist language in engaging female colleagues (e.g. focused on their dress/appearance rather than their science).

When the AGU awarded only one out of 16 medals to women scientists in 2018, I called them out for this publicly: Having won the AGU "Climate Communication Prize" that year,  I was afforded a "response" to my prize citation in Eos, and chose to once again draw attention to this problem in the closing paragraph, making a larger point about why inclusiveness is so important to science:

This year, I submitted three nominations for AGU Fellows/Prizes/Awards. All three were for women scientists. And, once again in an effort to be an "active bystander", I communicated this to my colleagues: I'm proud of the fact that I have been a mentor to a number of women scientists who are now leading climate communicators, and that half of my Ph.D. students have been women scientists. My most recent Ph.D. student, Andra Garner, is blazing an impressive trail both in the science she is doing and in her efforts to communicate the science to the public and policymakers.

While I've done all of these things, I still feel it's not enough and I continue to think about new ways we can encourage inclusiveness in science. I have refused now to participate in any all-male panel discussions (and I was pleased to read this recent commentary by National Institutes of Health Director Francis Collins, calling for an end to these so-called "manels"). Whenever possible, I seek out female colleague to co-author articles and commentaries. I was particularly excited to join Ayana Elizabeth Johnson, a leading science communicator and woman of color, in a recent interview for the popular public radio program Science Friday.

I take pride in being inventive about my approaches to science and to science communication. I believe we can all be more inventive about our approaches to inclusiveness as well, constantly innovating to find new ways to work toward that goal. Both science and society benefit when we do that. I would advocate that my colleagues think actively about these principles in their own effort as well.