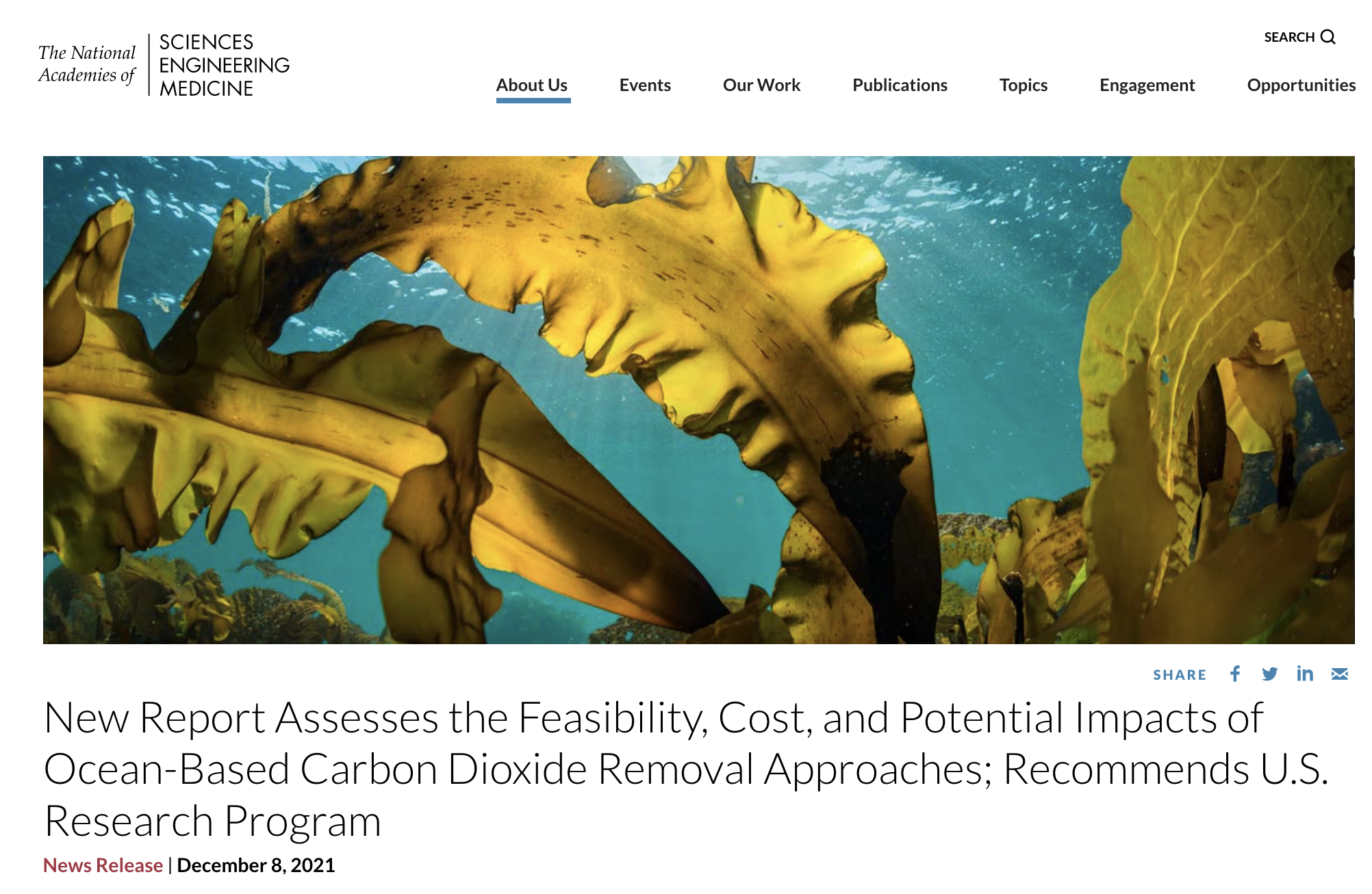 The U.S. National Academy of Sciences has published a new report on the topic of Geoengineering, the deliberate manipulation of the global Earth environment in an effort to offset the effects of human carbon pollution-caused climate change. Earlier this year they published a report on one type of geoengineering, "Reflecting Sunlight", that I commented upon here (as well as in an op-ed in The Guardian co-authored with my climate scientist colleague Ray Pierrehumbert of Oxford University). Here the Academy has instead weighed in on the topic of carbon capture--specifically, ocean-based carbon capture.

While I am, in full disclosure, a member of the Academy, I offer the following comments in an entirely independent capacity.

Let me start of by thanking the report authors and contributors for providing what is by and large a comprehensive assessment of the the science, economics, potential impacts and risks of various geoengineering schemes that have been proposed for ocean-based atmospheric carbon removal. Scott Doney is to be commended, in particular, as chair of the committee, for producing a measured and balanced report overall. I appreciated for example the tempered, appropriately caveat-laden language in the preface, particularly this passage (emphasis added):

This is a report on a research agenda to better inform future societal decisions on ocean CDR; the Committee is not advocating either for or against possible future ocean CDR deployments, and the Committee recognizes that ocean CDR would, at best, complement the role of climate mitigation approaches including decarbonization.

This language acknowledges the importance of distinguishing between support for researching the impacts (which may well reveal compelling reasons not to engage in these sorts of geoengineering interventions) and support for actual implementation of these approaches which would, quoting the authors, “at best” complement the role of climate mitigation. That having been said, I am concerned that the organization that sponsored this report, "ClimateWorks", openly advocates for not just the research of, but the actual implementation of, this sort of geoengineering. This speaks to a larger issue of conflicts of interest and a blurring of the distinction between research and implementation advocacy that I discuss further below.

As is always true with these sorts of multi-authored assessments, there are necessarily compromises that are made between differing viewpoints, and as a result there are areas of the report that are strong and other areas that are, in my view, weaker. Let me elaborate on some examples:
I will start with this statement in the front section on research recommendations relevant in this regard (emphasis added);

Additionally, research on ocean CDR would greatly benefit from targeted studies on the interactions and trade-offs between ocean CDR, terrestrial CDR, greenhouse gas abatement and mitigation, and climate adaptation, including the potential of mitigation deterrence.

In this innocuous-seeming single clause about "mitigation deterrence" lies the single greatest problem here, one which afflicts all proposed geoengineering interventions: The idea that we will have as a tool at our disposal the ability to capture and sequester large amounts of atmospheric carbon not only can be, but already is being used as an excuse by polluters and those advocating for them to delay and downplay the only safe climate solution—rapidly curtailing our burning of fossil fuels. This constitutes what's known as "moral hazard". As I explain in my book "The New Climate War":
A fundamental problem with geoengineering is that it presents what is known as a moral hazard, namely, a scenario in which one party (e.g., the fossil fuel industry) promotes actions that are risky for another party (e.g., the rest of us), but seemingly advantageous to itself. Geoengineering provides a potential crutch for beneficiaries of our continued dependence on fossil fuels. Why threaten our economy with draconian regulations on carbon when we have a cheap alternative? The two main problems with that argument are that (1) climate change poses a far greater threat to our economy than decarbonization, and (2) geoengineering is hardly cheap—it comes with great potential harm.
While the report suggests “targeted studies” on these “tradeoffs”, we don’t need any “studies" to conclude that this fundamental conflict (and yes, a conflict, not a tradeoff) exists. Here the report is somewhat deceptively portraying as merely a matter of “research” advocacy something that is actually a matter of “implementation” advocacy and which is subject therefore to all of the political complications therein. Here (and elsewhere at times) the report seems to exceed its stated remit, crossing the line between basic geoengineering science and advocacy for deployment/implementation.
Another example is the reports support for field campaigns that go well beyond what one might reasonably describe as pure “research” (much of which can be and is done safely using e.g. climate models). This starts to go down the slippery slope of implementation advocacy (see e.g. my Guardian op-ed w/ Ray Pierrehumbert). We have already seen how the deployment of field campaigns potentially begins to conflict with basic issues of self-determination and justice in the case of indigenous peoples who have objected, understandably, to being used as guinea pigs in efforts by some scientists to demonstrate the putative viability and/or safety of various geoengineering schemes, including ocean carbon removal projects.
There is a lot of discussion in the report about the need for global governance to e.g. prevent rogue state actors from implementing carbon removal schemes in an uncontrolled way. There is a discussion of the importance of establishing appropriate deliberative governmental bodies to regulate the activity of commercial actors, given potential conflicts associated with for-profit geoengineering ventures. However, I could not find any discussion of an equally troubling potential conflict of interest: scientists who are both doing and promoting research related to the purported efficacy and safety of geoengineering implementation and who, quite remarkably in my view, actually stand to gain monetarily through the implementation of these schemes. This is something I am very troubled by because it undermines public trust in the scientific claims that are being made about efficacy and safety.
In summary, this new National Academy report on ocean-based carbon removal does a good job of evaluating the science, impacts, and (by and large) the risks of ocean-based carbon removal. But while it succeeds in some respects, it fails in others, particularly when it comes to fully acknowledging the extent of moral hazard involved, the ever-fraught distinction between research advocacy and implementation advocacy, and the problematic conflicts of interest that potentially compromise many of the key players and institutions involved, including scientists who have blurred any distinction between advocacy for research and advocacy for actual commercial deployment and implementation. I fear the report, in this respect, will be used as fodder by agenda-driven players who continue to downplay the potential for addressing the climate crisis safely and reliably (i.e. by rapidly transitioning away from fossil fuels) and instead advocate a much riskier path forward including implementation of various types of geoengineering and other overly optimistic techno-fixes that, conveniently for polluters, kick the can down the road.
The fundamental problem is that when scientists attempt to weigh in on the fraught matter of geoengineering in a way that they might believe to be politically neutral and at least superficially “objective", almost inevitably they end up weighing in on matters that are ultimately policy prescriptive. Whether inadvertent or not, they end up putting their thumbs on the scale, and that can be exploited by those with a larger agenda. This is not the first time or even the second time that we’ve encountered this problem when the Academy has weighed in on the politically-fraught topic of geoengineering. And I suspect it is hardly the last.