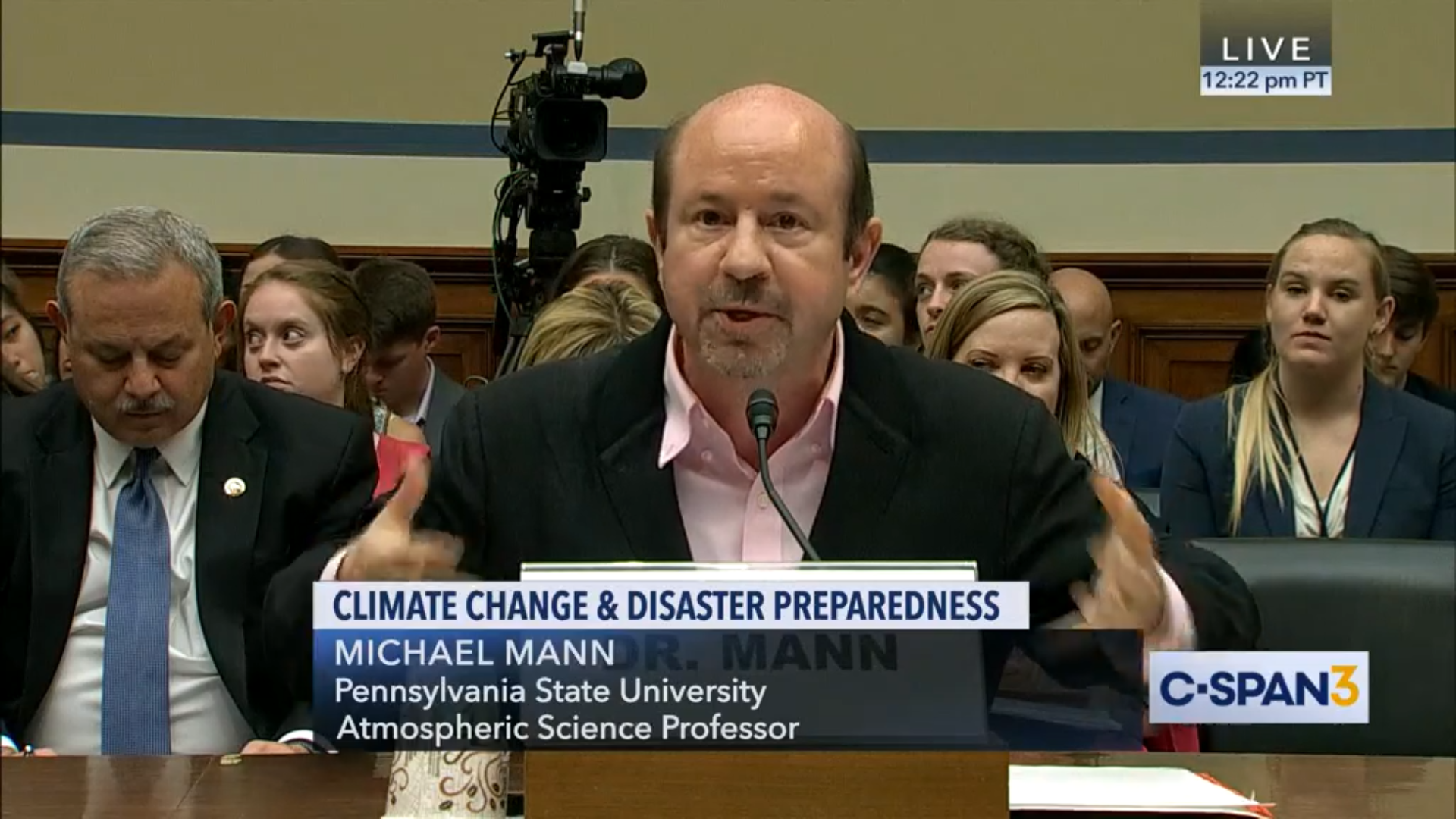 The video for the full subcommittee hearing is available here (my opening statement starts at 23:00).

Thank you Mr. Chairman, and members of the Committee.  My name is Michael Mann.  I am Distinguished Professor of Atmospheric Science at Penn State University, and Director of the Penn State Earth System Science Center.

And I have to say, I do feel a little bit today like I’m at the center of a Curry Sandwich. <pause>Sorry! <Laughter>

The primary focus of my research is understanding Earth’s climate system.

I am a Fellow of numerous scientific societies. I was awarded the Hans Oeschger Medal of the European Geophysical Union in 2012 and received the Friend of the Planet Award from the National Center for Science Education in 2014.  I received the Stephen H. Schneider Award for Outstanding Climate Science Communication in 2017, the Award for Public Engagement with Science from the American Association for the Advancement of Science in 2018 and the Climate Communication Prize from the American Geophysical Union in 2018. This year I received the Tyler Prize for Environmental Achievement. I have authored more than 200 publications, and four books.

I am perhaps best known for my paleoclimate research two decades ago that produced the iconic “hockey stick” curve demonstrating the unprecedented nature of human-caused planetary warming. My research in recent years, however, has focused on extreme weather events. I would like to talk about the substantial progress that has been made in this area in recent years.

And I would also like to emphasize that we’re using the term “natural disasters” but in many cases there is absolutely nothing natural about the disasters we are talking about. We’re not saying they have been caused by climate change, we’re saying that it has worsened them. That's what the research shows.

There is an emerging consensus now, for example, that we’ll see stronger and wetter hurricanes—and in fact we’re seeing them already. Hurricanes get their energy from warm ocean waters, and the oceans are warming due to the buildup greenhouse gases in the atmosphere from fossil fuel burning. The strongest hurricanes have thus gotten stronger. Over the past few years we have witnessed the most intense hurricanes on record for the globe, both hemispheres, the Pacific, and, as of Summer 2017 with hurricane Irma, the open Atlantic (and Maria, a similarly strong and devastating storm coming weeks later). With a recent post-season upgrade in status, Michael—my namesake—is now established as the latest land-falling category five hurricane in U.S. history, having devastated parts of the Florida panhandle when it made landfall last October.

Warmer air holds more moisture, and the amount of water vapor in the atmosphere has increased, due to human-induced global warming. That extra moisture leads to heavier rainfall. We know that rainfall rates in hurricanes are expected to increase in a warmer world, and we’re now living that reality now.

Sea level is rising because ocean water expands as it warms, ice sheets melt as it warms. Sea level rise is accelerating, and storm surge from hurricanes rides on top of higher seas to infiltrate further into our coastal cities. Our own work has shown, for example, that the combination of sea level rise and more intense hurricanes, has dramatically increased the likelihood of a Superstorm Sandy-like storm surge from a roughly 500 year event to a 25 year event. If we continue with business-as-usual burning of fossil fuels, we estimate that is will be a ~5 year event—happening on average at least once every five years-- by mid-century. By next century that flood height will be permanently exceeded. Heavier rain and higher sea levels combine to cause compound flooding in major hurricane.. We saw this effect in play in the catastrophic flooding in 2017 with hurricane Harvey and 2018  with hurricane Florence.

Summer 2018 saw an unprecedented spate of extreme floods, droughts, heatwaves and wildfires break out across North America, Europe and Asia. A warmer ocean evaporates more moisture into the atmosphere — so you get worse flooding from coastal storms (think Hurricanes Harvey and Florence).  Warmer soils evaporate more moisture into the atmosphere—so you get worse droughts (think California). Global warming shifts the extreme upper tail of the “bell curve” toward higher temperatures, so you get more frequent and intense heat waves (think summer 2018 all around the Northern Hemisphere).  Combine heat and drought, you get worse wildfires (think western U.S.).

Running climate models both with and without human impacts, we can investigate whether a particular extreme event happens more often in simulations that include the human impact. If so, we are able to “attribute” the extreme nature of the event to climate change. The scorching European heat wave last summer, according to one such study, was made more than twice as likely by global warming. The record rainfall in North Carolina from hurricane Florence was, according to another study, increased by as much as 50%. Some climate change impacts on extreme weather, however, are too subtle to be captured by current generation climate models.

In a study my co-authors and I recently published in the journal Science Advances, we identified a key factor behind the rise in extreme summer weather events like the ones that played out in summer 2018 that is not captured by current generation climate models. We showed that climate change is causing the meanders in the summer jet stream to become more pronounced and they are tending to remain locked in place for longer stretches of time. Under these circumstances -- when for example a deep high-pressure “ridge” gets stuck over California or Europe -- we see extreme heat, drought, and wildfire. And typically there’s a deep low-pressure “trough” downstream, stuck over, say, the eastern U.S. or Japan, yielding excessive rainfall and flooding. That’s exactly what happened in summer 2018. And we’re seeing something very similar now this summer.

Climate change contrarians love to point to scientific uncertainty as justification for inaction on climate. But uncertainty is a reason for even more concerted action. We already know that projections historically have underestimated the rates of ice sheet collapse and sea level rise. Now it appears they are also underestimating the odds of extreme weather as well. The consequences of doing nothing grow by the day. The time to act is now.

Climate Change IS Pain. Anyone who tells you differently is selling something—most likely fossil fuels.