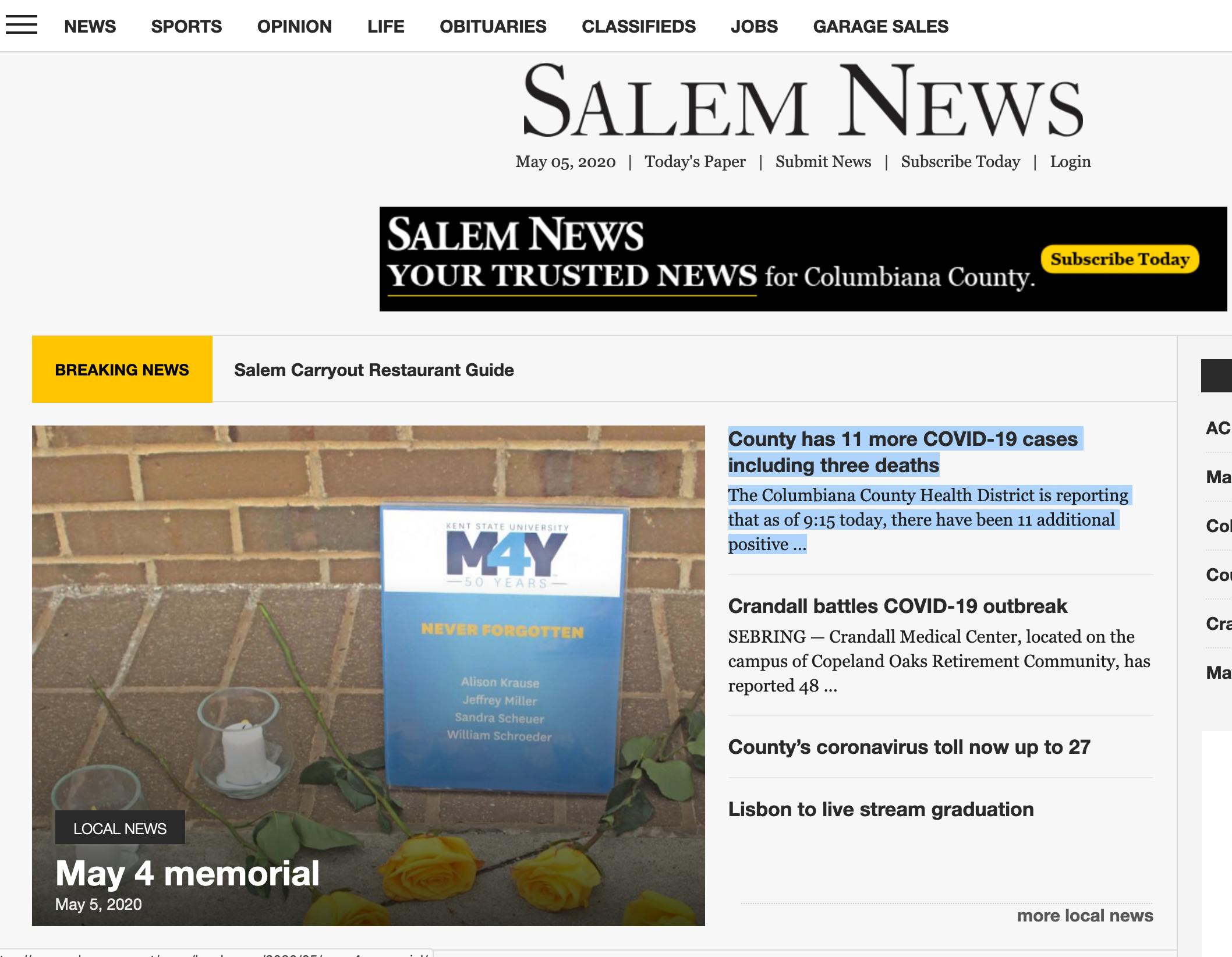 The Salem News is small town newspaper based in Salem Ohio. It appears to have far right-of-center editorial policies. Over the past few days, even as the county it represents recorded its 30th COVID19 death, it has published multiple letters and commentaries dismissing the seriousness of the crisis and attacking the social-distancing policies that public health officials have insisted are necessary.  During this same period it has also published letters and commentaries attacking renewable energy and denying climate change.

I happened to be mentioned in the latter commentary, which contains untruthful statements about me specifically. I submitted a formal letter of response only to be ignored by the publisher and editor.

Make no mistake, media outlets like the Salem News who promote misinformation and disinformation, especially about a deadly public health threat like the COVID-19 pandemic, bear culpability for the lost human lives that will inevitably occur because of the misinformation they are promoting. They must be held accountable.

In case you would like to contact the paper to express your thoughts, the publisher is Tammie McIntosh — tmcintosh@salemnews.net and the Executive Editor is J.D. Creer — jdcreer@salemnews.net

Here is my letter of response below

A recent (5/4/20) commentary in your paper by Jack Loesch spreads dishonest and deadly antiscientific propaganda that poses a danger both to human lives and the planet.

Sadly, denial of the reality and threat of the Coronavirus epidemic is being spread now by the same misguided individuals who have denied the greater, long-term threat of climate change. It’s not a coincidence—denial in both cases is driven by blind ideology, malicious partisanship and an agenda to discredit well-established scientific findings that pose a threat to powerful vested interests and their lapdogs.

Loesch promotes right-wing fever swamp denialist conspiracy-mongering by insisting that the social distancing efforts being encouraged by our leading health and medical scientists is simply “a tool to damage President Trump’s re-election chances”.  The official totals now show more than a million confirmed Coronavirus cases and nearly 70,000 deaths in the U.S.—and these are almost certainly an underestimate.  The U.S. just reported its deadliest day yet, as the conservative governors of several “red states” defy the stern warnings of our leading public health officials and disband social-distancing policies .  Make no mistake, the damage done by the sort of antiscientific rhetoric Mr. Loesch promotes in your paper can be measured in human lives.

Loesch also spreads lies about my own research in the late 1990s that resulted in the well-known “Hockey Stick” curve which demonstrates recent warming to be unprecedented over the past thousand years. He parrots discredited criticisms by two individuals (Stephen McIntyre & Ross McKitrick) with no expertise in climate science and fossil fuel industry ties.

As I recount in The Hockey Stick and the Climate Wars, the Hockey Stick has been ceaselessly attacked by climate deniers and by individuals like Loesch who parrot their talking points owing to the simple, undeniable message it conveys about the dramatic impact of human activity on our climate.

Mr. Loesch seems willfully ignorant of the fact that the scientific community has overwhelmingly validated our findings. The highest scientific body in the U.S., the National Academy of Sciences, affirmed our findings in an exhaustive independent review published in June 2006 (see "Science Panel Backs Study on Warming Climate", New York Times, 6/22/06).

In the two decades that have passed since our original work, dozens of groups of scientists have independently reproduced, confirmed, and extended our findings, including an international team of nearly 80 scientists from around the world, publishing in the premier journal Nature Geoscience in 2012. They concluded that recent warming is unprecedented over an even longer timeframe. The most recent report of the Intergovernmental Panel on Climate Change concluded that recent warmth is likely unprecedented for at least the past 1300 years, and there is now tentative evidence that the recent warming spike is unprecedented in tens of thousands of years.

In recognition of my research accomplishments, I have received the Tyler Prize for Environmental Achievement (often called the “Nobel Prize for the environment”) and last week I was elected to the U.S. National Academy of Sciences, among the highest honor afforded to American scientists.

Readers who are genuinely interested in the truth behind the science underlying the climate crisis, rather than the falsehoods and smears perpetuated by individuals like Mr. Loesch, should read scientist-run websites like skepticalscience.com, and books like my “Dire Predictions: Understanding Climate Change.

The coronavirus pandemic has laid bare the undeniable truth that the rejection of science and the promotion of antiscience propaganda is not only dangerous, it is deadly. Let us both learn that lesson and reject the dangerous nonsense promoted by individuals who would favor politics and ideology over human lives and the health of our planet.