Vice: A Commentary on the Politics of Climate Denial

I was recently invited to a screening of the new film Vice,

I will confess that I was positively predisposed toward liking the film. I'm a big fan of screenwriter/director Adam McKay, whom I've had the pleasure of corresponding with on occasion. His film The Big Short was an engaging and powerful expose on the financial corruption behind the U.S mortgage housing crisis of 2005. And the hilarious movie Stepbrothers remains one of my guilty pleasures (Adam, if you're reading: I'm still awaiting that invite to the Catalina Wine Mixer!).

So I sat down to watch Vice with popcorn and anticipation. And I was not disappointed. It's a gripping, funny, entertaining, irreverent take on the rise to political prominence of former Vice President Dick Cheney, I'm not going to do a formal "review" of the film. There are plenty of good ones out there already.

Instead, I would like to discuss an important climate change angle in the film that has thus far been largely overlooked. Though McKay doesn't hit you over the head with it, an unambiguous thesis of the film is that the extreme political partisanship that exists today over climate change has its roots in the deeds of Dick Cheney. I am sympathetic to that thesis because, well, I've more-or-less been advancing it myself for a number of years.

As I noted in a previous blog, it is only relatively recently that we have witnessed such profound partisanship in the U.S. when it comes to support for basic environmental protections. At the risk of repeating this litany once too often, Nixon founded the Environmental Protection Agency. Reagan signed the Montreal Protocol (to ban ozone-depleting pollutants), George H W Bush introduce cap-and-trade (to deal with the acid rain problem). And what about George W Bush?

Well Dubbya of course ran against the single politician--Al Gore--who is most closely associated with the cause of climate action in modern U.S. history.

So I suppose it isn't too surprising that we heard lines like this spoken on the campaign trail:

“As we promote electricity and renewable energy, we will work to make our air cleaner. With the help of Congress, environmental groups and industry, we will require all power plants to meet clean air standards in order to reduce emissions of sulfur dioxide, nitrogen oxide, mercury and carbon dioxide within a reasonable period of time. And we will provide market-based incentives, such as emissions trading, to help industry achieve the required reductions.”

What might be surprising for you to learn, however, is that it wasn't Al Gore--but George W Bush--who made that statement in the run-up to the election. It was Bush who had committed to combat climate change through the regulation of carbon emissions.

The pledge was ultimately not kept however. So what happened?

Well, here's a brief summary provided in my 2012 book "The Hockey Stick and the Climate Wars": 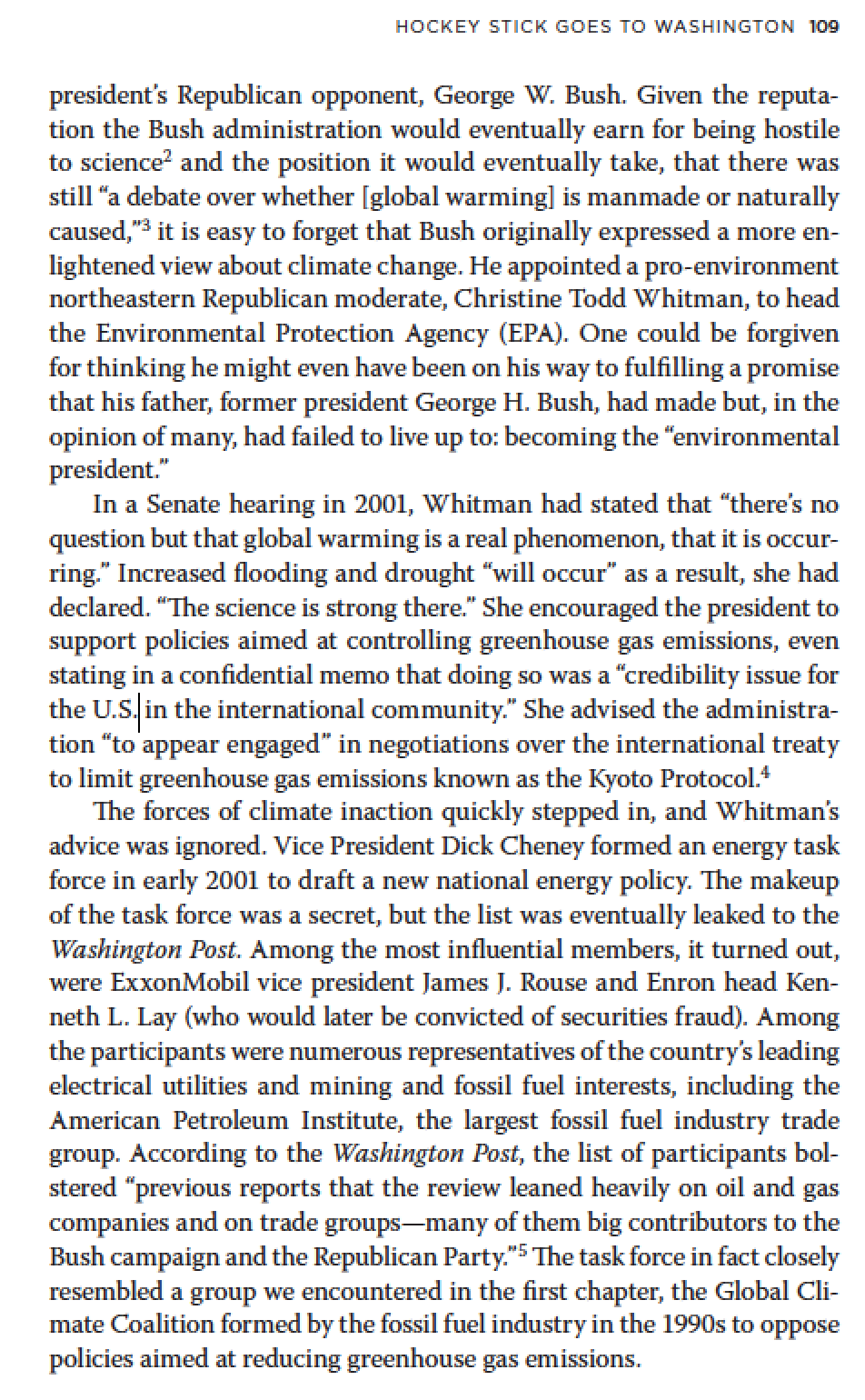 In a very real sense, the Cheney intervention mid-way through Bush's first term represented a critical juncture in modern U.S. political history. It marked the beginning of a new era in Republican party politics wherein the party would become increasingly beholden to fossil fuel interests and fossil fuel plutocrats like the Koch Brothers. And we have now seen the logical consequence of the path taken in the form of a climate change-denying president known as Donald Trump. But that's a whole other book of mine.

Toward the end of the film we see a visual montage of the damage and destruction wrought by Cheney and the policies of the George W Bush administration he helped shape. Much of it, of course, has to do with the now-infamous decision to go to war against Iraq. And, as we learn in the film, that war appears to have had far more to do with American fossil fuel interests and their desired access to Iraqi oil fields than the presumed battle against terrorism used to motivate the Iraqi invasion. But if you're watching carefully, nestled in between the sequences of war death and destruction is footage of one of the devastating recent California wildfires. The message once again, if subtle, is unambiguous: the catastrophic impacts of climate change we are now seeing play out are themselves a consequence of the policy of climate inaction sown by Cheney and the fossil fuel interests he represented.

One victim of the devastating Paradise wildfire in California last November was quoted saying "this must be what hell’s going to be".

The great psychologist Carl Jung is reported to have said "there are no coincidences". Perhaps he was right...