My Interview with Al Franken 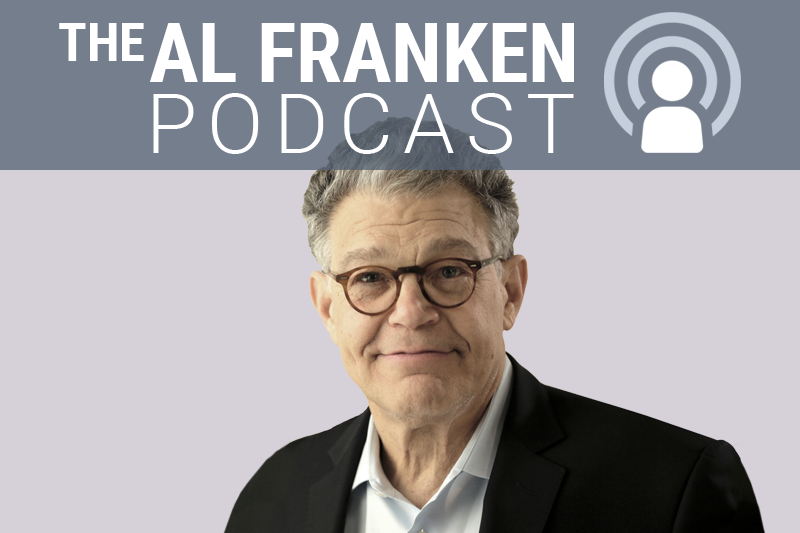 I did an interview with Al Franken for his new podcast a few weeks ago. It airs tomorrow.

I'm a longtime fan of both his comedy (he wrote many of the 1970s Saturday Night Live skits I can still recite today and he played a particularly amusing role in some of my favorite films, like Trading Places) and his work as a U.S. Senator (he was particularly proactive on the climate change issue, making it a focus of his near two terms as Senator, and serving as a much-needed Pitt bull in response to climate change-denying Republicans). As followers of mine know, I consider humor and satire to be among the most powerful tools in fighting climate change denialism--a tool that is particularly important in this era of Trump. When Al Franken stepped down from the U.S. Senate in December 2017, American politics lost its best practitioner of this craft in a generation.

And so I didn't think twice when he invited me to discuss the climate issue--the science, the impacts, the politics--on his new podcast.  However, none of this of course takes place in a vacuum. Given the nature of the allegations that have been made about Franken over the past couple years, and the highly contentious nature of the current societal conversation about gender and science (my blog from last week is relevant in this regard), I feel that I need to explain why I chose to do this interview. To some, it might look as if I'm giving Franken a free pass here. I most assuredly am not.

Let us start by acknowledging the importance of the #MeToo movement. For far too long--and this is especially true in the world of science--bad behavior by men, that is to say, sexual harassment, discrimination, and misconduct, has indeed too often gotten a free pass. Thanks to the #MeToo movement, the culture is starting to shift. The scientific community, for example, is now finally responding to this crisis. As I reported on my blog last week, which was about the importance of supporting and raising the voices of women and other marginalized groups in science, the U.S. National Academy of Science has now finally expanded its definition of expellable acts of scientific misconduct to include "discrimination, harassment and bullying"; sexual harassment defined as "unwelcome sexual advances, requests for sexual favors, and other verbal or physical conduct of a sexual nature that creates an intimidating, hostile, or offensive environment". That's a step in the right direction, but we're not yet nearly far enough along down that path.

Let us also, though, concede that there is an undeniable asymmetry in our politics today when it comes to matters involving alleged sexual impropriety. We have a President --in Donald Trump--who actually boasted of engaging in sexual assault against women. In the U.S. National Academy of Sciences (NAS), as noted above, behavior of this sort rightfully now gets you expelled from the Academy. But in today's Republican Party, it is apparently rewarded with loyal support. By contrast, in the case of a Democrat like Al Franken, contested allegations of inappropriate physical contact led to immediate demands of resignation by the party without the benefit of any due process i.e. a formal Senate investigation as was actually requested at the time by Franken.

Franken, unlike Trump, apologized to the various women, though maintaining that the instances of alleged impropriety were misconstrued or misinterpreted. Franken did not engage in any character attacks against any of the accusers. Again, contrast this with Donald Trump's disgusting efforts to demean and indeed defame his accusers. The contrast could not be more striking.

I will not attempt to litigate the various allegations that have been made against Franken. There is no shortage of attempts at this elsewhere. To summarize, there were three accusations of “forced kissing,” five accusations of touching women (including "waist-squeezing") while a photo was being taken, and of course the infamous photo where Franken pretends to grope fellow USO tour performer Leeann Tweeden while she appears to be sleeping. It is arguably that photo, emerging at the height of the #MeToo movement, that engulfed Franken and his career as a U.S. Senator.

Given how much the case against Franken hinged on the accusations by Leeann Tweeden, I have to confess that there's one thing that has made me uneasy from the start, which undoubtedly stems from my own personal experience and perspective. It is the fact that she was known as a conservative media personality who often appeared for example on the right-wing Sean Hannity show on Fox News.

I'll be honest about why this bothers me. I myself was the victim of a right-wing disinformation campaign spearheaded by Fox News and the rest of the conservative media empire. I am talking, of course, about the fake "ClimateGate" scandal, an attempt by fossil fuel interests and the conservative organizations, front groups and right-wing media outlets doing their bidding to discredit the science of human-caused climate change by smearing climate scientists with false allegations of impropriety. Central to their efforts were the attacks on the now-iconic "hockey stick" graph published by me and my co-authors two decades ago and on me personally.

When allegations of misconduct were leveled against me by right-wing news outlets, I had the benefit of official investigations by my institution, Penn State University, and the National Science Foundation Office of the Inspector General, each of which ultimately exonerated me after lengthy and comprehensive reviews of the allegations. I have also benefited from legal settlements in which conservative advocacy groups were forced to retract and apologize for false allegations against me. The new NAS policy against sexual misconduct too requires that an investigation first be performed (though the details of that are still being worked out).

The argument has been made that what Franken wound up at the center of a perfect storm of concerted attacks by the right-wing media, bad timing, and calls for resignation by Democratic colleagues caught up in the moment of the #MeToo movement. Franken didn't get the opportunity that I got when allegations of scientific misconduct were made against me, or that NAS members get under the new policy against sexual misconduct.

There is considerable evidence that the vast majority of sexual misconduct allegations made by women are indeed true, and too often the stigma of being attacked and shamed keeps women from coming forward. As the father of a teenage daughter (and frankly, just a human being), I find that tragic and unacceptable. It must end. And our policies must help create an environment where women are empowered to come forward with allegations of sexual harassment, assault and discrimination.

But we must also be open to the possibility that there will occasionally be those who are wrongly implicated, perhaps entirely for political reasons (as I was when it came to allegations of scientific misconduct by right wing interests looking to discredit my inconvenient scientific findings). It is possible that any movement, no matter how noble and well-intentioned, can in some instances be hijacked by those with an agenda, e.g. a cynical right-wing noise machine seeking to take out effective opponents and messengers. Again, I am highly sensitive to that scenario because I have lived it, having found myself in the crosshairs of the right wing attack machine myself as detailed elsewhere.

While my perspective led me down this thought process, I recognize that some people with other perspectives and life experiences might feel differently.  I understand that some scientists might have chosen not to do this interview, and I respect that.

Is there a line we shouldn't cross as we attempt to balance the sometimes dueling rights of the accuser and the accused? Surely. When credible allegations of sexual impropriety arise and there has been at least a semblance of due process afforded the accused, we must side with the accuser. I wouldn't do an interview with Mark Halperin. Or Charlie Rose. Or Matt Lauer. Or any of the other 200+ male public figures who have been credibly accused, charged with, and/or have admitted to such indiscretions.

Do the allegations against Al Franken meet that standard, at least right now? In my judgment--and to be sure, these things are indeed sometimes a judgment call--they don't. Only an honest and thorough investigation of the charges against Al Franken can determine the true facts here. And we just haven't yet been afforded that.

Should he, in the meantime, be shunned as a pariah? And should we be denied the unique skills & talents he possesses that make him such an effective voice in combating climate change denialism and right wing disinformation more generally? In my judgment, no.

I hope that folks will listen to my podcast interview with Franken. It's a hard-hitting yet light-hearted conversation about, well, the greatest challenge we face as a civilization--the challenge to avert catastrophic climate change in the face of well-funded, well-organized opposition by polluting interests. I for one am glad we've got Al Franken in our corner in this battle.